The most controversial platform game ever made!


Harambe Kong is a platform game created by T. R. Saling and developed by Digital Berzerk in 2017. The game was very successful and ported to a number of platforms except for iOS because it was rejected by Apple. In the game, Harambe must avoid kids who keep falling into his cage. Harambe must fight against his instinct to protect human children because doing so will summon the Zoo Keeper. Once this happens it’s game over for Harambe, who will find his brains blown across the screen. Harambe must travel through an endless number of days with the ultimate goal of escaping captivity, which is impossible. Harambe was born in captivity, so too will he be murdered in captivity. 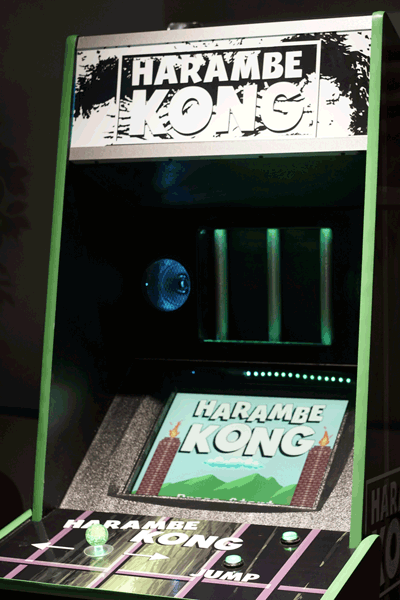 During his journey through captivity, Harambe encountered a lot of different people and different kids. It’s ironic as the same species who cared for Harambe, also killed him. Thinking about these events one must ask, was Harambe’s life dignified with respect and space? Most would likely say no. The major problem with zoos is lack of space, if zoos were treated like wilderness reserve areas, instead of urban concrete cages, events like that which unfolded in May 2016 would never happen.

Each kid falls randomly and they continue to rain into the cage as the day goes on. Once the kids hit the ground, they walk towards the cave, as they exit through the cave, a piece of fruit drops from the sky. Harambe must catch fruit to score, collecting 10 pieces of fruit causes the hamburger to drop. There are other triggers in the game-map that Harambe can trigger, doing so will cause unique items to drop that will increase the player's score. Once all of the kids have exited through the cave, the day resets and the game continues.

A video of gameplay by

"No joke best game ever!"